Édaein O’Connell from Glenderry is Kerry’s new Rose. The 27-year-old’s name was announced at around midnight on Sturday to a sold-out event at the Siamsa Tíre Theatre, Tralee.

Édaein was one of 23 young women taking part in the 2022 Kerry Rose Selection, hosted once again by RTÉ 7 TG4 TV host Dáithí Ó Sé, in one of his first live shows since the pandemic.

Entrants came from the length and breadth of the county, including Tralee, Listowel, Fossa, Castleisland, Killarney, Caherciveen, Currow and Lixnaw. Édaein was sponsored by Garveys Supervalu Listowel and sang a beautiful song called ‘Land of the Gael’ written by Listowel man Gary McMahon after her on-stage interview with Dáithí. 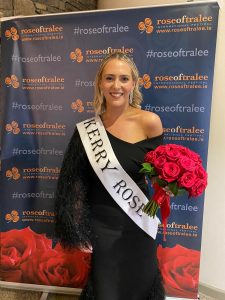 Each Kerry Rose entrant was judged individually, in a group and on their stage interview by judges 1980 Rose of Tralee Sheila Lawlor, Bríd McElligott, former Vice President of research and development of the MTU Tralee and 1995 Rose Escort and local auctioneer Ger Carmody.

“I was in absolute shock! When people say they weren’t expecting it – I really wasn’t expecting it. When Dáithí had the envelope and the drumroll started, I was sitting back thinking someone else’s name would be called out – that’s what I was expecting and anticipating. Then my name was called out, and I was in a slight panic thinking I had made a mistake and someone else’s name had been called but then I remember looking over and everyone was saying Congratulations but I still couldn’t believe it, even when SallyAnn was putting the sash on me. It didn’t feel real and I didn’t feel like I was in the room. It was the weirdest, most wonderful feeling! I was just delighted and I’m so happy now to be representing my county as the Kerry Rose. It’s amazing and I don’t know when, if at all it’s going to sink in!”

Édaein hails from a place called Glenderry, located a mere 10-minute drive from Listowel. Born and bred in the north Kerry area, she was schooled at both Dromclough National School and the Presentation Convent Secondary School in Listowel town. At 17, she attended NUIG in Galway city to study Civil Law. After this, she completed a higher diploma in Business Studies also in NUIG, and then took on a master’s in digital marketing from DIT in Dublin city. She planned on seeking out a career in social media management, but when fast-food chain McDonald’s swiped caramel sundaes from its menu, she happened upon a career in journalism. Writing on everything from fashion to travel to pop culture, she has written for the likes of the Irish Independent, the Sunday Times Style Magazine, Metro UK and more. In her spare time, she is an avid reader and a keen singer, having won two All-Ireland Fleadh Cheoil titles in her time.

·       Hairstyling for the year by Emma Quirke Hair

·        A lifestyle photoshoot from Cleary’s Photographers

·       A beautiful bouquet of Roses from Eleanors Florists.

On top of all this, every Rose received a goodie bag and voucher from Emma Quirke Hair, vouchers from Grounded Pottery, a jewellery charm from Brian De Staic jewellers and a free seaweed bath experience from Sneem Seaweed Baths.

All proceeds of a raffle held on the Selection Night went to the Tralee Branch of the Irish Guide Dogs for the Blind, who raised over €1,200 from the event. Édaein will support the charity for her year as Kerry Rose.

Édaein now has just a few months to prepare for the return of the International Festival which this year is held from Friday 19th to Tuesday 23rd August.