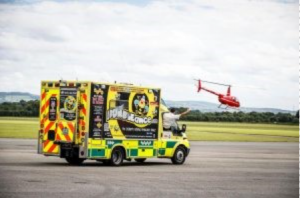 Join and support Ger Hennessy as he walks from Cork to Kerry with his team as he raises vital funds for Bumbleance along the way this bank holiday weekend. Ger is departing from his home town in Cork on Friday the 4th of June and finishing up on Sunday the 6th of June at The Meadowlands Hotel in Tralee who have sponsored accommodation for the fundraiser. Ger is expecting to walk 208km over the weekend and all for such a worthy charity. A raffle with prizes graciously donated by local businesses has so far raised €8000, even before Ger embarks on his journey. The support and kindness has been overwhelming.

Bumbleance is part of the Saoirse Foundation, a not-for-profit charity founded by Tony and Mary Heffernan, parents of two very special children, Saoirse and Liam. The charity is named after their daughter, Saoirse who was diagnosed with Battens disease, a rare genetic and fatal disorder in March of 2009. In March of 2010 Liam was also diagnosed with Battens Disease. With two critically ill children, the Heffernan’s spent a lot of their time on the road going to and from hospital appointments and surgeries. The couple know first-hand the stress and the challenges that parents face when moving seriously ill children. Following Saoirse’s death in January 2011 aged just 5, the Heffernan’s realised the need for a specialised child focused service dedicated to transporting critically ill and seriously injured children. Bumbleance was launched in 2013 and has become the children’s National Ambulance service for Ireland. The first Bumbleance completed approximately 200, 000 km in just 2 years delivering smiles across the nation for hundreds of children from every county in Ireland.

In 2014, the Heffernan’s personally experienced the power of Bumbleance when it undertook the most heart-breaking service, the end-of-life angel trip for their son Liam that allowed Liam to be taken home on his final Journey in a compassionate, sensitive and caring environment accompanied by his parents. Like Saoirse, Liam grew his angel wings in the arms of his parents at the age of 5 years. 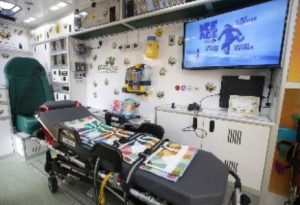 The main services we wished to cover the costs for are detailed below followed by many other costs that Bumbleance incur,

Bumbleance provides an invaluable service through its Angel Trips. An Angel Trip is designed for a terminally ill child who is making his or her final journey on earth before he or she grows their Angel Wings. Bumbleance ensures that parents can make this final journey together with their loved one in a safe, compassionate, sensitive and caring environment. Before the Angel Trip service, parents would often have to drive themselves home with their loved one or to take a taxi, this is not a viable option for many families during such a devastating and heart wrenching journey. 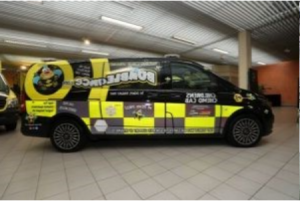 Another amazing safe and caring environment for any sick child to travel that is currently receiving treatment for their illness. Having had my partner go through Chemotherapy before and having to travel further outside the county to receive treatment I know first-hand a simple service like this can mean so much to those going through it.

A caring and friendly face along the way to help ease any children that may be nervous going into the hospital while also proving the amazing service of having to travel from one end of the country to the other. They provide dvd’s PlayStation and games, whilst having the television to look at and try keep their mind of it whilst travelling.

Some of the many costs to Bumbleance :

We hope you can support Ger Hennessey and his amazing team this weekend.

Friday : Cork City Centre to Killarney standing down in The Killarney Court hotel for the night.

Saturday : Killarney to Killorglin standing down in Teahan’s Guest Rooms Cromane for the night.

When Did You Start Up Zenergy? and Why?