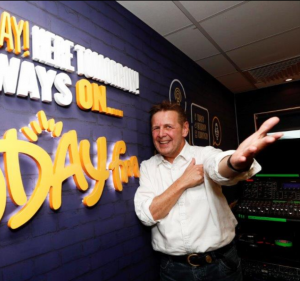 For over 40 years, Ian Dempsey has been bringing a smile to the faces of radio listeners right across the country. But while he admits that he pinches himself every day at the success of his career, he says that he still gets as much joy from radio as his loyal listeners do, four decades on. 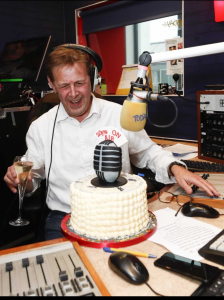 As humble a man as you’re ever likely to meet, Ian credits his pure perseverance in landing him his first big gig with RTE, having known from a very young age that DJ’ing was all he wanted to do. A stint in pirate radio was the stepping stone, he says, which began when he was just 17 years old and saw him land his first celebrity interview at just 18.

“I was 17 and had always been fascinated by the voice inside the radio in our kitchen before I left for school every morning. And then pirate radio became a thing. It was suddenly possible for anybody to have a go. This was a dream for me,” Ian tells CONNECT.

“I used to make little radio shows with my friend Jonathan and I felt like talking on the radio was my vocation. So, I made a recording with the help of a good friend Brian McIvor – this was at a stage where I was presenting what I thought was needed. It was basically a blended impression of all the people I had been listening to. It took another few years for me to find my real voice. Pirate radio was a joy because there were no rules and no money so there was no real paymaster to make you behave properly. At 17 I was living the dream on the radio every day. At 18 I was doing my first ever celebrity interview with Sigourney Weaver about her movie Alien no less and I was drinking Brandy and Ginger in The Hogan Stand pub with no real income to talk about. Then at 19 it became my actual job.”

Asked if he had always known he wanted to be a DJ, or if he ever had any other ambitions, Ian admits that he did dabble in other ideas, but radio was his true calling. 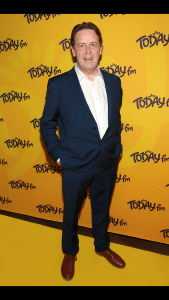 “I was always interested in technology, and still am today, and I think sound engineering would have been my other career if the radio hadn’t worked out. I didn’t go to third level and decided to attend the so-called University of Life. I hope to get my degree someday,” he joked. “I used to run events like dog shows and talent competitions in my local park when I was about 12 or 13 and I used to play in the sound effects from time to time at The Abbey Theatre in Dublin. All highly enjoyable, but I do believe that radio

is my one true love, career wise, and am so lucky to have been able to make a proper job of it.”

Like any aspiring DJ, Ian was overjoyed to land a full-time job with RTE back in 1980, but admits that it was the third time of asking that did the trick!

“Like every other pirate radio DJ, I applied for the RTÉ job when Radio 2 was announced and I was called for an audition but I failed to get picked. I reapplied and got nowhere again. So, I went back to my pirate radio show and gave up on it,” he tells CONNECT. “Then, one night after the station had started I got a phone call from a friend Robbie Irwin who was a producer in Radio 2 and a former pirate. He advised me to apply for a third time. I was reluctant, not wanting to be rejected yet again, but Robbie implied that if I went for it this time I would be successful. And do you know what? He was right! I joined the station on 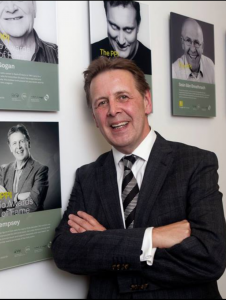 March 1st 1980 along with Barry Lang and Ciana Campbell and my mother, for one, was beside herself with excitement.”

He remembers vividly how daunting it was for the first year, but looks back now and is grateful for the opportunities that it brought him.

“This was now a job. A paid job. This was RTÉ and the corridors of studios were daunting to say the least and difficult for the first year or so while I tried to find my feet. But it was great to work with Robbie and the legendary producer Kevin Hough who put manners on me very quickly,” Ian recalls. “I was in awe of the greats like Gay Byrne and Mike Murphy (one of my heroes) and was quite a shy type so I never spoke up for myself. Eventually, I was given more and more work and was tried out on different daily and nightly shows with varying degrees of success. Breakfast is my favourite because I feel like I’m catching people after they’ve emptied their minds through sleep and I can start gently filling it up again for a brand new day.”

Of course, Ian’s radio career has seen him interview some of the world’s most famous stars and he says he will always have his standout favourites.

“I’m a massive David Bowie fan and met him on two occasions – once in a backstage social way and once for an interview. I loved meeting him and he was all I wanted him to be but I was unhappy with my interview so I never broadcast it,” he said. “Other highlights would include drinking Budweiser with Bruce Springsteen in Berlin, getting a total exclusive with Madonna in London, being backstage with Chris DeBurgh in Rotterdam and tracing the Irish roots of Mariah Carey in a Santa costume in New York.”

But with any highs, inevitably come some lows – and there were certainly a few ‘nightmare’ interviews that he would rather forget!

“Michael Stipe (REM) wasn’t having a good day when I met him and I could have asked him the greatest questions ever but he wasn’t having any of it. He was quite rude and put me down straight away. Thank God, bandmate Peter Buck stepped in and eased the tension. He seemed to be used to having to do that,” Ian recalls.

“I also had a nightmare interview with a guy called Mike Nolan who was one of the members of Eurovision winners Bucks Fizz. He was uncooperative and tetchy all the way through. I couldn’t wait to see the back of him.”

Ian shocked the nation when he moved from RTE to Today FM, where he now presents his own weekday breakfast show. But while the decision was a tough one, he ultimately knew it was the right one.

“I think it was the right thing for me to do at the time. I’ve never regretted going to Today FM and I’m still enjoying working with some of the best radio people around. There’s still a great hunger in my team to put out entertaining radio shows and we’re always trying to make the next day better than the last. But I still have friends from my last job and we keep in touch.”

While Ian also fronted some very successful TV shows – most notably Dempseys Den, The Beatbox and quiz show Number 1 with Joe Elliot and Dave Fanning – it’s obvious to regular listeners where his true passion lies. He says he feels blessed to work in his ‘dream job’ every day.

“I think I found my love for radio from listening and wanting to be the presenters I heard when I was young. I get an instant high when I stick on a pair of headphones and switch on the microphone. When the red light goes on, I’m in another world. It’s difficult for some people to get that, but it’s a real feeling of sheer joy. Very few people get to live out their dream job. I appreciate it all the time.”

Of course, Ian’s regular listeners will be all too familiar with he and Mario Rosenstock’s hilarious ‘Gift Grub’ comedy slot – but when asked about their winning partnership (and indeed friendship), a humble Ian credits his partner in crime for its success.

“As far as I’m concerned Mario’s sketches are world class. They’re incredibly well produced and written and they’re more than just getting the impressions right. He has created another world with the Gift Grub characters and I’m delighted to be a part of it. We meet and discuss the next day’s sketch on a daily basis and the whole breakfast show team has an input. We know at the end of the meeting what we’ll be doing but then Mario turns it into the finished product.”

And speaking of great friends, Ian has of course lost some very special people along the way, including Larry Gogan, Gerry Ryan and Tony Fenton. He still remembers them fondly – each for their own very unique personalities.

“What an amazing line up for Paradise FM that would be. Any radio station would give anything for these three on their schedule,” he says fondly. “Each was different but their talent was unique. They all broke the rules to make what comes out of the radio better. I miss being able to switch them on and wish there were more like them out there. Tony was one of my best friends, Gerry was like a slightly older brother who looked after me and Larry was the Godfather of Irish Radio – I was honoured to know him and to witness his wicked sense of humour.”

But as well as a hugely successful radio career, the other major love of Ian’s life is of course his wife Ger. They have been married for 34 years and have three adult children – but when asked what the secret to their success was, he joked that they just actually like each other! 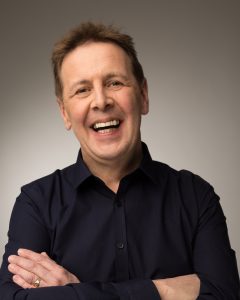 “I married Ger in 1986 and we have three grown up kids – Shane 30, Evan 26 and Aislinn 24. There is no handbook and there is no secret. We just get on – we like each other,” he says. “I think people sometimes forget what they were attracted to about somebody in the first place. It’s still there somewhere.”

When asked what makes him happy, Ian simply joked: ‘Wine’ – but quickly elaborated…

“That might sound a bit flippant, but it really does, because I never drink on my own so it normally means that I’m with somebody and we’re chatting away and laughing and listening to music. My wife Ger joins in and now our grownup kids and friends. That’s what it’s all about. I love a good Rioja on a Friday night.”

He is also a self-confessed ‘gadget freak’ and even joked that a certain new phone is actually giving him sleepless nights!

“I love technology and am fascinated by anything that has flashing lights on it – although I still can’t work the washing machine,” he joked. “I am currently trying to justify why I need to buy an iPhone 12. There’s no reason for me to get one, but it’s out there so I’m very tempted – and not sleeping at night wondering about it. I also enjoy procrastinating – I’m brilliant at that.”

With Covid throwing everyone’s world into chaos over the past few months, Ian says it has allowed him to focus on the simple things in life. It’s something he is very grateful for and encourages others to consider.

“Simplicity is the key. What were we all doing? The world is still here. Enjoy the simple things. Hey look there’s that squirrel in our back garden again,” he said.