From the moment he first appeared on our TV screens, Martin King charmed his way into the hearts of his audience. With his quick wit, down to earth personality and captivating screen presence, it is easy to see why he has become one of Irelands most loved TV presenters. I recently sat with Martin to find out more about the man behind the TV persona, from being a father to now a grandfather and his most cherished role of being a loving husband to his wife Jenny. 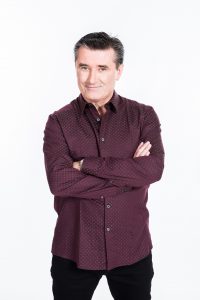 Martin, it is a pleasure to sit and chat with you! Having started out your career in radio, how did the transition into TV come about for you when, for most presenters, its usually a change from TV to Radio!

Making that move from Radio to TV felt like a very natural transition to me, people had often told me that the kind of content and material I put out on my radio show would work well on TV. For me, radio is like theatre of the mind and I enjoyed that. When the idea of me making that move came about, it was actually when TV3 was first spoken about in the 80’s and they had approached me to present a dating show, but the money that was needed to launch a TV station just wasn’t readily available so it was put on the back burner. In the late 90’s the idea raised its head again but this time it would carry through. The guy that was running the news, Andrew Hanlon, I had previously worked with in 98FM amongst other places, he told me they were hoping to make the second half of the show more magazine style. They wanted to line up both a sports and entertainment segment followed by the weather. That was the difference, they wanted the weather to be its own segment rather than just an information slot and that was the type of material I put out on the radio. I used to do these live entertainment segments, members of the public would ring in and nominate a family member who was difficult to get up in the morning, myself and the team would burst into their bedroom and say “Get out of the bed!” and it was very entertaining for the public and all involved. Another example was we would say on the show ok, this is the area we are in we are parking up. We want tea and toast for the whole team, you have 10 minutes to find us and give us our breakfast. It would bring the entire street together, it was great fun for all involved. The first one out to us would get a big prize, the rest of the street would all get breakfast paid by us so it was just a really fun, entertaining segment and that’s the style of presenting I wanted to carry into my TV career.

You really came into your own when you became a presenter of the 6 O Clock show given that evening shows can be difficult to get off the ground, how was it for you to bring it to the public and make it the success that it is today?

The idea behind the 6 O Clock, which was initially the 7 O Clock show, was to have something in place because UTV Ireland was about to come on air meaning that TV3 would lose the evening soaps. Now we know now that UTV Ireland was a short lived thing and we eventually did get the soaps back. So with the show, we really just wanted to trial it in the afternoon to fine tune it to eventually move it to the evening time and that was always the plan with it. We would go in, test the waters, trial a few different features and see what worked, get rid of the parts that weren’t working. So we initially broadcast at 7pm but of course when the soaps came back we had to move to 6pm which completely changed our audience too. The people that were previously available to us at 7pm are usually commuting at 6pm. It was challenging, we had spent so much time fine tuning the show to what worked, we had built up a good audience base and now we were starting from scratch again. Thankfully, the 6pm show has turned out to be a great success and then covid came along and the show took on a whole different meaning. Who would have known or thought that television would be an essential service? The day I was told that I thought to myself, my dad is up in heaven breaking his heart laughing at the idea of me being called an essential service! It opened us up to a greater, more available audience because there was no commute anymore for most people, a 1hr drive home had now turned into a walk down the stairs! People really wanted the break from the news, they had covid and news fatigue. Everyday was so heavy and it got to stage hearing the numbers in the daily figure announcement was so upsetting you just didn’t want to hear it anymore. We were so mindful that we were coming on straight after the news and of course had to acknowledge the situation but still to provide people with that escapism.

With all this going on, how did you manage to raise 5 children with your wife Jenny? 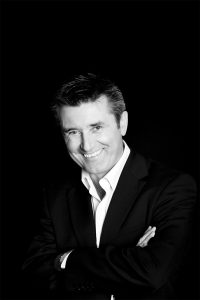 It really was a tag team effort and we were really lucky in one sense because I have been working remotely for years. I would have my notes emailed to me so that I could read over them at home and our production meeting became digital too due to Covid. I had always spent part of my day working remotely anyway, so when my children were younger I was able to be there in the mornings, drop them to school and collect them afterwards and then head into work for the evenings. When Jenny opened up her own photography business, she would work in the mornings and then come home to take over from me for the afternoons with homework and dinners. I’d come home from work and take over the evenings so she could use that time to meet clients over at the studio so it was very much a tag team! It was almost like a football game at times, substituting on and off! Now we were also fortunate to have Jen’s sister in law, who has sadly since passed away, she would mind the kids in the afternoons when both of us had to work.

Your wife has recently been through a traumatic illness and I’m sure as a family it was an incredibly difficult time for you all. Can you tell us about that time in your life and how you are continuing to come through it?

It was a very difficult and tough time, both times were. The first time she got the diagnosis it was a real shock to us because we just weren’t expecting it to be a brain tumour? We were thrilled when the surgery was so successful and there was no need for further treatment, it just became a yearly thing that she would go for a scan. I remember the CEO of TV3 at the time, David McRedmond who is now in charge of An Post, his sister also went through a traumatic time and he said to me, every time you go in for a scan you are right back at the start again and he was completely right. That is what it felt like, waiting anxiously on results. Now we went from scan to scan but the thing was, we did not live our lives scan to scan and I think that is a huge difference because we had to live our lives and we would just face the scans when they came. All were good until recently when there was no scan because of Covid, so she went 2 years without a scan and when she eventually got one, they saw there was something there. I had taken Jenny away to Salzburg for our anniversary, we had known that there was something brewing and we were told that yes, they had found something and she would need surgery to remove it, this was just before Christmas. It was a lot tougher this time round because the surgeon had to go in a little bit deeper to get it out so in terms of recovery, it was a lot tougher on Jen. We were told that there was a 50/50 chance that she might need chemotherapy and/or radiation, but thankfully, she celebrated her birthday and the following Wednesday she got a call to say her scan was really good so there was no need for any treatment. It was brilliant to get that news because it had been hanging over us the weekend of her birthday but we both just parked it and got on with the celebrations. We are very fortunate that she is in a great place, we are all in a great place now thankfully, with our new grand-daughter arriving and another grandchild on the way in August, there is so much to celebrate and look forward too.

With that said, it is difficult not to acknowledge that so many families in Ireland are currently undergoing similar situations. On a final note for our interview, what advice can you offer to anyone finding themselves in those similar circumstances?

You have to find the positive, just really try hard to find the positive and remain that way as much as you can which is sometimes very tough but that’s what we did. Whether it was a scan or a consultation with the consultant, we would just focus on the good news and whatever route we had to go down we would just work towards a resolution and do it as positively as we could. I know it’s tough but you just have to do it, it will make a difference and help get you through it.

The Battle is on! James Patrice returns to our screens with Justine Stafford in RTÉ’s Battle of the Food Trucks