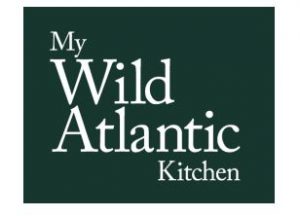 My Wild Atlantic Kitchen: Recipes and Recollections, a compilation of the favourite recipes of acclaimed chef, Maura O’Connell Foley, has been awarded Best Woman Chef Book at the Gourmand World Cookbook Awards celebrated on Monday 29th November, in Paris.

Commenting on the win, Maura O’Connell Foley said:, “Receiving this international award for my lifetime book is truly phenomenal and unexpected. It is a tremendous honour and is a wonderful acknowledgment to the entire team involved.” 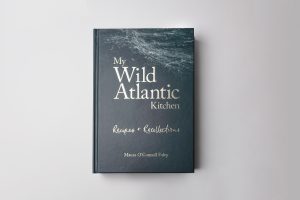 The Gourmand World Cookbook Awards were founded in 1995 by Edouard Cointreau and are considered the pinnacle of food publishing, recognising and rewarding the very best food and wine books, printed or digital, as well as food television. This year, entries were received from 225 countries and regions for the awards which are the only international competition in the sector.

This prestigious award sees Maura join the ranks of high profile past award winners including Hélène Darroze and Claudia Roden. Today’s ceremony also saw other Irish winners including Katy Lucey from Gougane Barra Hotel who was awarded Best Hotel Book 2021 for Cooking with Katy, and Clodagh McKenna who took home the award for Best Celebrity Chef Book for Weekend Kitchen. 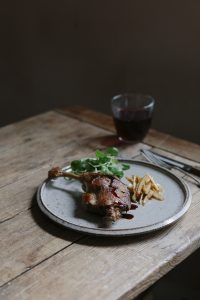 The awards ceremony took place at the Gothic-style Réfectoire des Cordeliers in the Saint-Germain-des-Prés/Odéon district in Paris. The historic building dates back to the 13th century, and is, in Mr Cointreau’s opinion,the most beautiful place ever to host the Gourmand Awards. 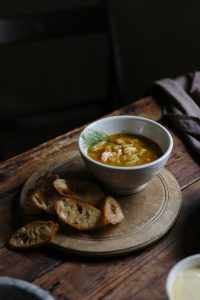 Maura’s award-winning book, My Wild Atlantic Kitchen: Recipes and Recollections was released in March 2020 and is a true labour of love reflecting Maura’s career in Kenmare which spans over six decades. It not only captures over 250 dishes, it includes beautiful art, illustrations and landscape photography and features the formidable chef’s culinary recollections and stories, all expertly woven throughout. The book perfectly communicates Maura’s ethos of keeping food simple, cooking with care and using the best available local produce.

Recipes are seasonal and classic, all carefully organised into eight chapters: Breakfast, Starters, Fish, Meat, Vegetables, Desserts & Baking, Sauces, Stocks & Staples, as well as a dedicated section on Dinner Parties. It features stand-out dishes from the first tea shop Maura and her mother, Agnes, opened in 1961, and the culinary delights from the menus of The Purple Heather Restaurant and Piano Bar, The Lime Tree Restaurant, Packie’s Food and Wine and Shelburne Lodge Guesthouse, which Maura continues to run today. 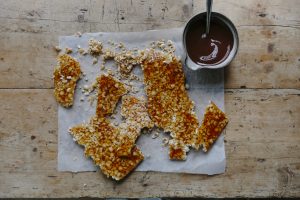 My Wild Atlantic Kitchen: Recipes and Recollections was produced in close collaboration with Kenmare-based graphic designer, Éamonn O’Sullivan, Creative Director of Anchor Studio. It features over 100 images captured by Lynda Kenny, Maria Bell and Norman McCloskey all of which showcase Maura’s love of art and the Irish landscape.  It also includes illustrations by artist, Christine Bowen, and paintings from internationally acclaimed Irish artist, Pauline Bewick.

The book’s design was recognised at the IDI 2021 Awards earlier this month where Éamonn received the award for Best Printed Book Design.  The highly respected awards are judged by a panel of Irish and international judges to showcase the talents of designers and collaborators across Ireland and Irish designers based abroad. In announcing the win, the judges concluded that “The mix of landscape, portraiture and still life photography and the illustration builds a rich narrative. ” 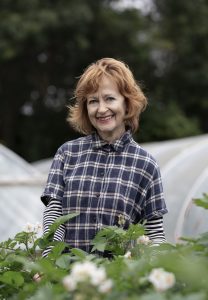 A  joy to explore and a must-have for the kitchens and coffee tables of those who love to cook and those who appreciate and enjoy good food,  My Wild Atlantic Kitchen: Recipes and Recollections (RRP €35) is available directly from www.mywildatlantickitchen.com, selected independent bookstores and via Amazon.