Kerry International Film Festival (KIFF) is delighted to announce that American film producer and current president of Lucasfilm, Kathleen Kennedy, is the recipient of this year’s Maureen O’ Hara award. The esteemed producer has participated in the making of over 70 films worldwide including five of the fifty highest-grossing films in motion picture history, and she also co-founded the production company Amblin Entertainment with Stephen Spielberg and Frank Marshall. She has produced a wide range of films that have since become beloved by fans, such as the emotionally-endearing E.T. the Extra Terrestrial, the thrilling films of the Jurassic Park series, acclaimed historical dramas such as Munich, Lincoln, and Schindler’s List, and three of the four celebrated Indiana Jones adventures, among scores of others. She is currently producing several new Star Wars series and films, including the third season of the Emmy Award-winning The Mandalorian.

KIFF 2021 are greatly honored to be presenting Kathleen Kennedy with the prestigious Maureen O’ Hara award in celebration of her exceptional work in film and for her outstanding contribution to the industry in general. The much-coveted award is offered exclusively to women who have excelled in film and KIFF are privileged to be presenting this award to a producer of such caliber. Due to covid restrictions, the award will be presented via an online interview which will be available throughout the festival on the KIFF website and social media platforms from October 4, 2021.

Taking place 14 – 17 October 2021, KIFF is a well-established festival that celebrates shorts, features, live film scores, emerging film talent and industry events. This year, the festival will be hosting both an online and physical event in partnership with venues throughout Kerry, such as Cinema Killarney, Randles Hotel Killarney, the Plaza Hotel Killarney and SiamsaTíre Tralee.

Upon hearing the news, Kathleen Kennedy said: “It is such an honor to receive the prestigious Maureen O’Hara award, a namesake that represents the progressive grit and enduring grace of powerful women in the industry whose careers and accomplishments paved the way for all of us. I very much admire what the Kerry International Film Festival has accomplished and look forward to virtually meeting the filmmakers in October!”

KIFF has gone from strength to strength over the past 12 months as they gained over 17,000+ live streams during their online festival in 2020 and they recently received their largest number of film submissions in the festival’s history to date. Additionally, KIFF was delighted to recently announced Kerry Airport as its title sponsor for 2021 and they are very grateful to be working with key partners that include The Arts Council, RTÉ Supporting the Arts, Kerry County Council, Tower Records, Kerry Broadband and the Irish Film and Television Academy (IFTA) as well as a variety of local businesses.

KIFF looks forward to announcing their 2021 program in the coming weeks. This will include a diverse selection of films and documentaries for all ages and genres, and it will also showcase a promising new selection of Kerry Short films not to be missed. There is no doubt that a major highlight of the KIFF 2021 schedule will be the presentation of the Maureen O’ Hara award to the exceptionally talented producer Kathleen Kennedy. The general public can source the live interview online at: www.kerryfilmfestival.com from 4 October. 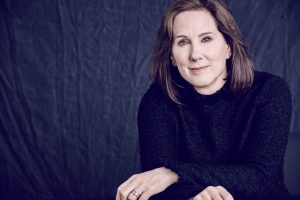 Launch of ‘The Cubbie’ at Listowel Library

Recipient of the Academy’s prestigious 2018 Irving G. Thalberg Memorial Award and aneight-time Academy Award®-nominee, Kathleen Kennedy is one of the most successful and
respected producers in the film industry today. As President of Lucasfilm, she oversees thecompany’s three divisions: Lucasfilm, Industrial Light & Magic and Skywalker Sound. Kennedy was the producer of Star Wars: The Force Awakens (2015), which broke the record for the biggest domestic opening of all time that year, and Rogue One: A Star Wars Story, the number one grossing movie in 2016. She went on to produce Star Wars: The Last Jedi (2017), the highest grossing movie worldwide in 2017, as well as Solo: A Star Wars Story (2018) and Star Wars: The Rise of Skywalker (2019). Kennedy is executive producer of The Mandalorian, which was honored with seven Emmy Awards. The second season of the series aired on Disney+ in 2020.

Kennedy has produced or executive produced more than 70 feature films, which have collectively garnered 120 Academy Award nominations and 25 wins. Among her credits: Jurassic Park, E.T. The Extra Terrestrial, The Sixth Sense, the Back to the Future trilogy, Who Framed Roger Rabbit, Gremlins, The Goonies, Poltergeist, Empire of the Sun, Lincoln, War Horse, The Curious Case of Benjamin Button, The Diving Bell and the Butterfly, Schindler’s List, The Color Purple, and The Adventures of Tintin.

Kennedy recently received the Fellowship Award, the highest honor that the British Academy of Film and Television Arts can bestow. She is also the recipient of the distinguished CBE award (Commander of the Most Excellent Order of the British Empire) and was elected Chair of the AFI Board of Trustees. Aside from her executive and producer roles, she was one of the founding Council Members of Hollywood Commission to Eliminate Sexual Harassment and Advance Equality and is currently on the board of the LA Promise Fund, Library of America, and USC’s School of Cinematic Arts.

Prior to joining Lucasfilm in 2012, Kennedy headed The Kennedy/Marshall Company, which she founded in 1992 with director/producer Frank Marshall. In 1981 she co-founded the phenomenally successful Amblin Entertainment with Marshall and Steven Spielberg.