Well that’s it for another year. From the Rose Ball to the fashion show, the Escort of the year to the Rose Title, it’s been a week to remember, here are some of our highlights
It all began on Friday night with the Kerrygold International Rose Ball, the social highlight of the year, an event which adds that Hollywood feeling to the week-long event in Tralee. Over 1,100 people joined the 32 Roses, their Escorts, celebrities, sponsors and guests for the first official event at this year’s Festival, with scrumptious food from the wonderful Brook Catering and magical dancing to Brass and Co it is definitely a date for the diary.

Conor is leader of the pack!!!

A qualified aircraft maintenance technician who works as an electrician/linesman is the 2014 Newbridge Silverware Escort of the Year at the Rose of Tralee International Festival.
Top gun Conor Walsh, a farmer’s son from Cappamore, Limerick and Escort to the North Carolina Rose, Nancy Boyce, was the main man according to a vote taken by this year’s Roses and Escorts.
Dáithí Ó Sé announced the result live on RTÉ One television tonight, while Conor Doyle from Newbridge Silverware presented him with a wonderful prize consisting of a 44-piece silver-plated canteen engraved with his family crest, a stylish Gents collection of Newbridge Jewellery including Rose of Tralee Cufflinks, bracelet, watch, leather belt and wallet and a cheque for €1000.
Giving his reaction to the result Conor said: “I was lucky enough to escort Nancy, the North Carolina Rose who is an absolutely brilliant girl. It’s been a wonderful experience from the beginning. You just meet a great bunch of lads and the Roses are unbelievable and I’d encourage any lad to put his name forward to become an Escort at the Rose of Tralee.”
Conor works for ESB Networks and he’s actively involved in sport playing rugby, soccer, tag rugby, American football and skiing.

Maria Blooms to become Rose of Tralee for 2014 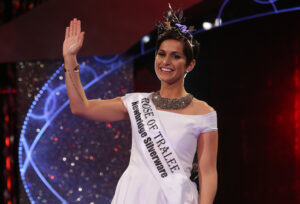 Maria Walsh (27) is the first Philadelphia Rose to take the title of Rose of Tralee for 2014. She was presented with her sash and tiara by the 2013 Rose of Tralee, Haley O’Sullivan and David Doyle from Newbridge Silverware, lead sponsors of the Festival.
Maria, who works as a studio manager for a clothing and lifestyle brand in Philadelphia, said: “I am extremely blessed to receive this wonderful honour in the company of 31 high calibre, beautiful, intelligent and hard-working women. We’ve had an extraordinary time in Tralee and great friendships have been formed.”
Born in Boston, Massachusetts, Maria moved to the south Mayo village of Shrule in 1994. She studied Journalism and Visual Media in Griffith College Dublin and graduated in 2009 before venturing to the Big Apple in early 2010. She moved to Philadelphia in late 2011.

DON O’Neill promised high-octane Red Carpet glamour and he didn’t disappoint after bringing his most spectacular gowns to the Rose of Tralee Autumn Winter Fashion Show in the Dome.

The Ballyheigue native, who is based in New York, said the 1600-strong audience was bigger than attendances at any other fashion

shows he’s been involved in from New York to London or Paris.

Proudly sponsored by The Kerryman newspaper, the Rose of Tralee Autumn Winter Fashion Show is the first such event of the season each year in Ireland and it delivered on its promise to fuel dreams and keep the paparazzi cameras flashing. Over 40 designers and boutiques were joined on the catwalk by The Design Centre, Dublin and Dublin-based designer Synan O’Mahony in showcasing their very best styles for coming Autumn/Winter season.

The Producer of the Rose of Tralee Fashion Show, Celia Holman Lee, said: “This is a unique event that consistently delivers top quality styles to nearly 2000 people every year. The Festival Dome is the most ideal venue to stage an event of this magnitude for fashionistas who travel from all over Ireland to see style, elegance and sophistication on the longest catwalk in Ireland.”

This year’s Rose of Tralee International Festival kicked-off on Friday August 15th and around 200,000 people were in Tralee over the course of the five-day Festival, the highlights of the street entertainment included Union J, Walking on Cars, three parades, two fireworks displays and an air show.

The General Manager of the Rose of Tralee International Festival, Oliver Hurley, commended the local business community and the dedication of the team of 150 volunteers who worked tirelessly to deliver a top class event to people of all ages.

Planning for the 2015 Rose of Tralee International Festival will get underway in the coming weeks and the dates for next year’s event are set to be confirmed in September.