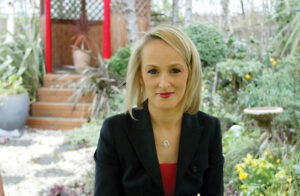 SHE has become a hugely familiar face on our television screens as one of TV3’s top sports reporters, but Ardfert’s Sinead Kissane admits that while growing up in Kerry, she never, ever imagined a career in front of the TV cameras.

While sport was always an avenue she wanted to pursue as a career in some shape or form, she says she was leaning more towards sports psychology than sports journalism while contemplating her future as a student at Presentation Secondary School in Tralee.

Now front and centre of TV3’s sports reporting team, Sinead says it’s a career she loves and one that has offered her some amazing opportunities to meet some wonderful sporting icons.

“It’s funny because I never really wanted or planned to do TV, ever. Journalism I thought about alright – my uncle was a writer for the Irish Times – but I had a number of options, including sports psychology,” Sinead told Connect.

“After school, I studied Arts in UCD and afterwards went on to do a Masters in Journalism which I finished in September 1999. It was only through that DCU course that I ever thought about TV. It was part of the course and I really liked it. I liked the immediacy of it.”

Sinead explained that a two-month work placement at TV when she was 21 cemented her desire to work in TV, but said she knew from the get-go that news reporting was not the route she wanted to take.

A love of sport was enshrined in her from her childhood days in Ardfert and that was, without doubt, the route she wanted her career to take.

“We were literally into every sport growing up,” Sinead said with fondness. “My dad (David) was involved in setting up St Brendan’s Athletics Club in Ardfert and my mom (Mary) was on the committee, so we took part in athletics at

the Community Games for years. I also played camogie and soccer – nearly everything really. It was just something I loved and that stayed with me as I got older, I guess”

Sinead said that her initial placement at TV3 in 2000 certainly helped ‘get her foot in the door’, but admitted that she had a tough five years between that and being offered a full time job with the station in 2005.

Like all freelance journalists, Sinead plied her trade for a number of news and sports media outlets, which was extremely tough and made her question herself more than once.

“Being a freelance journalist really tests you because there is no security. You start asking yourself if this is really what you want to do. As confident as I was about the career I wanted,it was very tough.”

Before joining TV3 on a full time basis, Sinead worked for a year with Newstalk when it was a Dublin station – a job she says was invaluable to helping her decide her career path.

“While I was there I got a great idea of what sports journalism really was and the standards that were required,” she said. “They set the standard as far as I was concerned and it was an amazing experience.”

Now a full time sports reporter with TV3, Sinead says she is loving work and despite being in what is undoubtedly a male-dominated environment, she has never been made to feel any different to her male counterparts.

“Ah maybe 10 years ago you might have gotten the odd comment, but I can safely say I have never found it to be an issue,” Sinead said. “And to be honest, in this day and age, I wouldn’t expect to come across anything like that, thankfully.”

Saying that, however, a demanding job as sports reporter for a national news outlet does of course come with its own pressures.

“Some people say it’s a great job, which is can be of course, but it also comes with its own responsibilities,” Sinead explained.

“Firstly you have to find the right balance between loving sport and being a journalist – and making sure that those values are most important, rather than being a fan. There are times too, however, when you simply can’t help getting caught up in the emotion of the big sporting occasions, and you have to make allowances for that”, she says.

“One of my favourite sporting highlights was when Munster won the Heineken Cup in the Millennium Stadium in 2006. I was getting ready to run out on the pitch and do a live broadcast and there were tears running down my face. Sometimes it’s hard to be impartial, but I just had to grab a hold of myself and do it.”

Live TV in general comes with its own challenges, Sinead explained, so you just have to make sure you are prepared because anything can happen.

Asked if she still gets nervous before a live broadcast, Sinead says there would be something wrong if she didn’t.

“I get worried if I’m not nervous,” she said. “You have to have a bit of an edge left and always know you might make a mistake.”

Anyone who knows Sinead also knows that she never shies away from asking the tough questions either, no matter who is at the receiving end of them.

Famously asking former Ireland head coach Eddie O’Sullivan if he would be considering his position after a disastrous 2007 Rugby World Cup, Sinead found herself with some more tough questions to ask just two weeks ago. This time she was questioning Munster stars Peter O’Mahony and Conor Murray about their support of convicted drugs cheat – and new teammate – Gerbrandt Grobler.

“In situations like that I always hope that those you’re questioning know that I am being fair on them and everybody concerned,” Sinead explained, “On the Grobler issue, first of all those two players should probably have never been put in that position [by Munster] but I had a job to do and had to ask them the question. It’s as uncomfortable for me as it is for them but, as I say, there are no hidden agendas. Once we all know that what’s being asked is fair then I think they generally understand. They know I am just doing my job and they can’t take that personally.”

With the Six Nations just about to kick off, Sinead says she is prepared for a full-on work schedule, following Ireland’s exploits as they bid to win another title. And her predictions?
“I really think Ireland have a great chance [of winning the tournament] this year. People talk about the challenges of playing England and France away, but Joe Schmidt has done it before and I think the team needs to validate themselves with a title, so they will be gung-ho for a win.”

When asked how she likes to spend her down time when she eventually gets some time away from the TV cameras, Sinead laughs and says even her time off revolves around sport.

“It’s funny because my downtime is really my uptime too and sometimes I find it hard to differentiate because it almost always revolves around sport,” she said. “I love nothing more than going to a Kerry football match with my parents, whether it’s at home or in Croke Park. Sport is my downtime, I just wish I could get home to Kerry more than I do. There is nothing like getting home really.”

When Did You Start Up Zenergy? and Why?