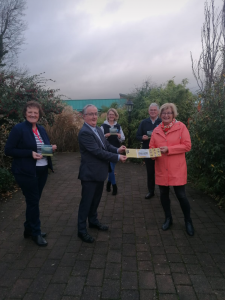 The perfect Christmas stocking filler, ‘Songs of Kerry and Others’ has been compiled by well-known Dingle man Thomas O’Callaghan and was the brainchild of Bryan Lee from Tralee, a legend in music circles in Kerry for many years.

Featuring 14 beautiful Irish ballads, the CD, as the name suggests, has a very strong Kerry theme, with songs like Dingle Bay, Brosna Town, The Rose of Tralee, The Kingdom of Kerry and The Boys of Barr na Stáide all included.

Thomas O’Callaghan explained that choosing Recovery Haven Kerry as the benefiting charity was a family decision, and one he knows his late parents Michael and Mary would be very happy with.

“Cancer, as we know, is an illness that has no regard to health, age or fitness of those inflicted with it and in many cases the results are terminal. Those who have seen people close to them go to their eternal rewards know what the journey to the final resting place is like and we as a family have been there as both of our parents the late Michael and Mary O’Callaghan succumbed to this illness,” he explained,

“Over the years, great advancements have come on stream to help people who are afflicted with the various forms of this illness. Such positive solutions include medical, after care and drop in centres such as those operated by Recovery Haven Kerry, who are beacons of light and hope for the many who are survivors of the illness. Our family felt this was a worthy cause to support and we know both of our late parents would be very pleased that the proceeds of the cd are going to such a worthy cause.”

This is Thomas’ third CD, having already raised thousands of euro for the RNLI in Clare and Kerry, as well as Dingle Coast and Cliff Rescue through his previous CDs, Dingle Bay and Take Two.

Emma Celebrates 4 Years In Business and Chats About Her Journey