Super stylish Charlene Brosnan from Killarney was crowned Dawn Milk Queen of Fashion after she impressed  the judges on ladies’ day, at Killarney Races. Basking in glorious sunshine

She had heads turning with a layered ivory coloured chiffon dress, with matching shoes and a spectacular, eye-catching head-piece. 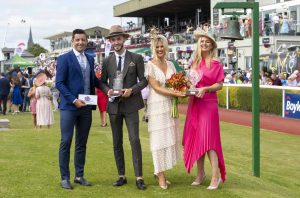 Charlene, a teacher in St Oliver’s National School  in Killarney, is no stranger to ladies’ day events at race meetings around the country and she previously featured among the prizewinners and finalists, including at this year’s Punchestown festival and at a Listowel meeting when she won a prize for having the jazziest headpiece.

The judges at today’s event who had the unenviable task were TV presenter Anna Daly and former Dancing with the Stars winner and GAA star Aidan O’Mahony, they chose 10 finalists before making their final deliberations.

Kerry is named the Top Irish Staycation Destination for 2021. Why Discover Kerry this Autumn?