SEPTEMBER  in Kerry has always been synonymous with Listowel Races, but this year the atmosphere will be quite different with racing still expected to take place behind closed doors.

For champion jockey Barry Geraghty, the experience will be completely different too as he will be looking on as a spectator for the first time, having announced his retirement from racing this summer.

As he turns 41 this month, Barry tells CONNECT that it just felt right to call time on his career now, admitting that he has had a pretty impressive run up to now so it was time to quit while he was ahead. 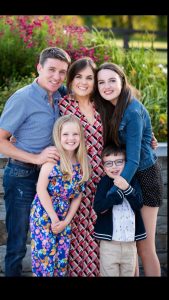 “I’ve had an average run with injuries in the last five years – I had a broken leg when I took the job with JP in 2015, I’ve broken both arms over the years, punctured my lung and then I broke my leg badly in April 2019 in Aintree, the day before the Grand National, which had me out for six months. That was a cruel one physically and mentally. It was probably the worst injury I had and to get it so late in my career on the back of an average run of injuries in the previous years, it got me thinking maybe this is the year to go. You’re just kicking the can otherwise really.”

Asked if he will miss the thrill and excitement of race day, particularly as we head into the winter calendar, Barry admits it will certainly take some getting used to.

“I love watching of course, but I will miss it to a degree naturally and there will be a weaning off period if you like,” he said. “I’m sure the winter will be harder when the real good horses are out. That will be harder to watch – but you can’t just have the big days. You have to be there seven days a week and be fully committed to it and at my age it felt the right time.”

What retirement will mean, however, is being able to spend so much more quality time with his Kerry wife Paula and their three children Siofra, Órla and Rian. He admits that the commitment required to be a full time jockey has unfortunately meant he has been a part-time dad throughout his career.

“I’ve been a part-time dad for the past 12 years, spending three or four days a week in England from October to the end of April, so it’s time to start putting myself and my family first now because I’ve been lucky enough to achieve all I’ve ever dreamt of,” he proudly declares. 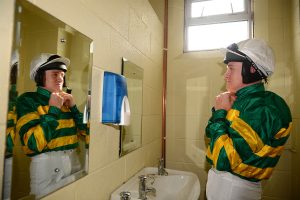 “It’s been hard to juggle the two, but when you grow up in that environment and lifestyle from your teenage years, your life is dictated by when and where you’re racing. So life has always been that way and the kids have had to grow up with that. I’m leaving on a Wednesday evening for Dublin airport and maybe not home until Saturday night. Obviously you chat and Facetime them and stay in contact, but you’re gone four full days.”

With lockdown restrictions putting a temporary halt to racing after Chetlenham in March, Barry said he got a feel for what retirement would be like and said he absolutely loved the time spent at home with his family. 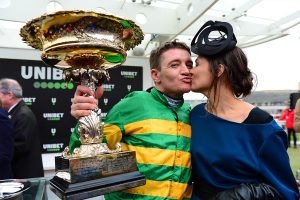 “While my career has been great, in a funny way lockdown was brilliant in so far as it gave me a chance to sample life away from racing and it gave me a good feel for what I was doing and knowing it was the right thing to do. Even for Paula and the kids – everyone was getting a taste for the future,” he said.

“We were able to just have quality time at home and not be under time pressure, where everything is at the drop of a hat. In the past, I could get a phone call saying I have to be in England tomorrow, so to have that freedom was something I would never have had before. I feel as if I shouldn’t be celebrating being in lockdown, but it freed up life and I was able to enjoy time with the kids and not be distracted.”

Barry’s wife Paula (Heaphy) hails from Ballylongford, so of course Kerry has a special place in his heart, outside of racing.

“Ah yes, Kerry was always lucky for me – not only in racing but in love as well,” Barry admits. “We spend a lot of time in Kerry and go down at Christmas and during the summer as much as we can. We’ve had great times there and great memories, so I’ve always had a soft spot for Kerry. I love the Kerry connection and now that I’m not racing we plan on spending even more time there with Paula’s family. “

Reminiscing on a wonderful career that has spanned almost 25 years, Barry told CONNECT that his interest in horses and racing began at a very young age. By the time he hit his teens he saw no other career for himself. 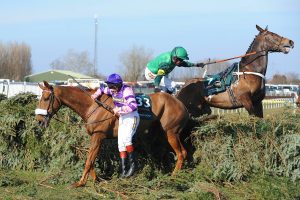 “I grew up on a farm and my parents owned a riding school in the early 90s. We had ponies and I always had an interest in horses and racing and that interest grew and grew from there. We were on a pony four or five hours a day. I always loved it and went through all the stages, from riding ponies to hunting, to pony racing and eventually racing itself when I was 16,” Barry explained.

“I’d say from the age of 13 or 14 it’s all I wanted to do, so then you’re hoping and dreaming that you might get the opportunity or you might be good enough.”

Barry admits that a combination of hard work, dedication and good old fashioned luck is what helped him enjoy such an illustrious career.

“I was lucky that the doors kept opening for me. I started with Noel Meade when I was 16 and rode my first winner six months later. He had a very strong team of horses and it gave me the opportunity that not everyone gets,” Barry admits. “But you make your own luck too. Being in the right place at the right time is important, but you have to be capable of making these opportunities count.”

Asked to choose a highlight of his career to date, Barry didn’t hesitate: winning the Aintree Grand National in 2003 is right up there. He was just 23 years old at the time!

“For me, it was winning the Grand National – no doubt,” he insists. “I was very lucky to ride lots of winners over the years, particularly at Cheltenham, but the Grand National – it stands alone. It’s hard to describe the feeling – it’s complete elation, but it’s surreal that it can happen to you. I was lucky that it happened to me when I was 23. People say you don’t savour it when you’re young but I felt I savoured it and enjoyed it and loved it.”

Barry said that while he always dreamt of winning it again, he was quite content to have that box ticked at least once.

“Obviously, I hoped and dreamt of winning another one, but at the same time, every day I went out it sat comfortably with me that I had one. I wasn’t chasing something that had eluded me. It wasn’t a cross to bear. “

In terms of his favourite race meetings, nothing compares to Cheltenham, he says: 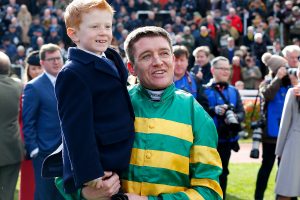 “In a lot of people’s eyes, your season is judged by your success at Cheltenham, so I’ve been very lucky there over the years. I rode five winners there in March, and had five winners in 2012 and 2013, which was amazing,” he said. “You go to Cheltenham hoping for one win. If you get one you’re hoping for the second, but this year I had 11 rides and five won. That’s a pretty good strike rate.”

From an Irish racing point of view, Listowel of course holds a special place in his heart – having been the leading rider back in 2004 and winning the Kerry National three times.

But the highlight of his Irish racing career, he says, was winning the Grand National in 2014 after years of trying. It was a childhood dream that meant something very special to him, he said.

“To win the Irish Grand National on ‘Shut The Front Door’ for JP McManus – that was brilliant,” Barry said. “I grew up only a stone’s throw from Fairyhouse, so it was the big local one. I’d ridden in it 17 or 18 times and had no luck. I had even ridden seven or eight favourites and never even went close, so to finally win it in 2014 was brilliant.

“That was one that was eluding me – if I hadn’t won it, it would have been a big omission on my CV. Haven grown up standing at the last fence with my two brothers when I was 11 watching Adrian Maguire win it on a horse called Omerta – it was a childhood dream so to finally realise that was brilliant.”

Humble as ever, Barry says that while he has been so lucky to achieve such success in his career, it has always been a team effort.

“It a combination of everything, from the jockey to the owner to the trainer,” he said. “I was very fortunate to be riding a lot of very good horses for JP McManus and you can’t go without the firepower – it was a brilliant position to be in. But you have to convert them as well. You also need your trainer to have them horses in the right form – so it’s a shared responsibility if you like.”

So now that he has finally retired, what’s next for the soon to be 41 year old?

“Well firstly, I’m going to enjoy the time off for starters. I keep young horses and keep busy with those and am looking forward to nurturing young talent and see where that takes us,” he said. “I have no plans to go down the professional trainer /owner route, it’s just something I enjoy doing, working through the early stages with youngsters and helping them to develop. I’ve also done plenty of media work and that’s always there and of interest, but to be honest I just want to step off the conveyor belt for a while.”