HEALTH IS WEALTH – A FIT BODY – Exercise and Wellness

IF ever you wanted to truly understand what the closure of rural pubs has meant to the publicans of Kerry, spend just five minutes with Mary McCarthy in Finuge and you will be left in no doubt. 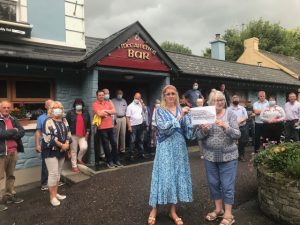 One of Kerry’s longest serving publicans, Mary was hugely emotional as she spoke about the effects of lockdown on someone like her – a passionate pub owner who has been at the helm of McCarthy’s Bar in the north Kerry village for 48 years.

When we chatted, the government has just delivered the devastating news that bars would not open on August 10th – and Mary was distraught. Heartbreakingly so!

“I found it very hard to get up in the morning and come out and see the empty bar,” Mary said. “The silence out there – it’s so hard to get used to it. We’d be used to stocking all the shelves and the clinking of the glasses, getting ready for the day, so this is so hard. I missed out on all that for the past five months and it’s very tough to deal with when you’re on your own.”

Not seeing her customers (or her genuine friends as she prefers to call them) is the main reason for such sadness, as Mary admits she misses them terribly.

“The pub is the focal point of the village and, for many, it’s somewhere for them to come and meet up for the company. My customers are my friends and I can’t tell you how much I miss them. They are so wonderful. They ring me every night and it’s like they miss me as much as I miss them,” an emotional Mary explained. “I miss the company terribly. They are genuine friends who have been amazing through all this, asking if I’m ok and checking on me all the time. They mind me and I can’t wait to see them again and welcome them back.”

It’s easy to see why Mary is eagerly awaiting a return to business, and insists that all safety and social distancing measures can easily be adhered to in her bar. The impressive beer garden has also had a makeover recently, all in anticipation of a new opening date! 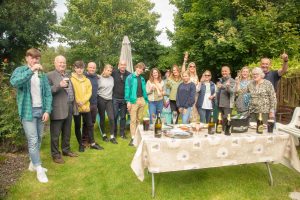 Mary’s love for what she does shines through when you speak to her. Family and community are paramount in her life and she isn’t afraid to admit how proud she is of the business she and her late husband Gerard built up over almost half a century. Her daughters Nollaig and Caitriona also play a role in the current business – the fourth generation of McCarthys to get behind the bar – despite having their own jobs with Aer Lingus and Bank of Ireland respectively.

“I came out of Browne’s pub in Ballyduff and I worked in the bar with all my siblings at a very young age, “ Mary explained, “I loved meeting the people and my father and mother used to say I was a very chatty child, so I got on great with the customers. Then cupid struck at a coursing dance in Ballyduff and I met my late husband Gerard McCarthy who was a also publican, so I just fell in here I suppose. It was nothing new to me and I’ve loved every bit of it.”

While Mary is the first to admit that the rural pub trade today is nothing like it used to be decades ago, she says it’s all about adapting. And that has never been more true than right now!

But that’s not to say she doesn’t have some amazing memories to cherish of times past and of wonderful characters she was lucky to call her friends: 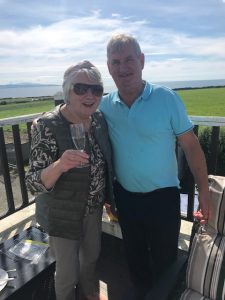 “Ah, a lot of the old characters have passed away since, but we had some lovely times back then. One that stands out was when the German tourists would come from Shannon in their horse-drawn caravans and stay across in the field. There could be 30 to 40 of them and they might stay a few nights and fill the bar and people would actually come out to Finuge to see them off when they were leaving. It was fantastic,” Mary recalled.

She also had some great memories of the three Sheahan bachelor brothers who lived in the nearby thatch cottage – pure old stock who loved the craic.

“Tomáisín was one of the brothers and he was such a character. He would wear his wellies to Listowel Races and would be dancing in the bar with them on after,” Mary recalled fondly. “The year after he passed away, a few of the visitors asked me ‘where’s the man with the wellies’ and I told them he’s dancing in the sky now. ”

In fact a photo of Tomáisín is now famous around the world after a chance photo opportunity by a passing journalist over 40 years ago.

“There’s a picture in pubs and magazines around the world of Tomáisín giving our horse Marigold a pint,” Mary explained. “It was taken by a freelance journalist, who was a friend of Sean McCarthy, one day she was here with him. That photo has been all over the world.”

Mary has also been credited with being a bit of a matchmaker in her time – with many a couple hitting it off together in the bar and going on to get married. None more famous, of course, than Dublin footballing great Bernard Brogan and Listowel lady Marie Keane Stack – parents of All Ireland winners Alan and Bernard Brogan – who were introduced in McCarthy’s Bar by Jimmy Deenihan.

Mary has also suffered tragedy in her life, not only losing her husband Gerard, but also dealing with the death of her son Maurice at the age of 22. It is 25 years now since he passed, but Mary says she will be forever grateful for the love and support Maurice received from the community of Finuge while he was alive, particularly from Sean McCarthy who took him under his wing. 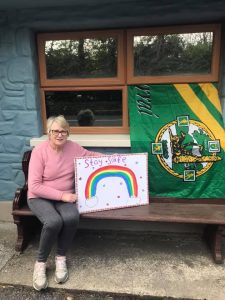 Returning to the possibility of reopening, Mary totally refutes the argument that it’s putting money over people’s health. In fact she knows only too well the dangers of Covid19, as her brother John Patrick contracted the virus and was in intensive care for weeks.

It is about businesses trying to get back on their feet, of course, but more importantly for Mary, it’s getting back to some semblance of normality and reconnecting with her friends and customers who she has missed dearly for over five months.

“We can and we will follow the government guidelines, but if we cannot all open then I would certainly be all for a county by county approach. If this continues you will have premises that won’t open and that’s the truth of it, so they should give us some window at least, even if it’s a few hours. It’s not about money – it’s about getting together again and working through this new normal. This virus is going nowhere so we have to adapt with our customer’s safety as our priority.”

As Mary prepares to celebrate her 71st birthday in September, the topic of retirement was mentioned – but dismissed just as quickly!

“Oh I can assure you I’ll never retire, I don’t know the meaning of the word,” Mary insists. “I enjoy my job so much, so why would I want to retire.”

HEALTH IS WEALTH – A FIT BODY – Exercise and Wellness