Turn to Nature for Healing 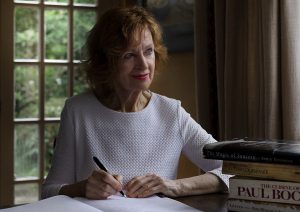 SHE has spent all her life working in the food and hospitality industry, building

her business from a humble cafe in the 1960s to owning and running some of Kenmare’s most well known and established restaurants.

Now, after seven decades in the business, Maura O’Connell Foley has decided to share some of most loved and favoured recipes in a new book entitled Wild Atlantic Kitchen: Recipes and Recollections.

While still operating Kenmare’s Shelburne Lodge Guesthouse with her husband Tom, Maura tells Connect that the book was over a year in the making, joking that her daughters ‘insisted’ she finally share her knowledge with others through a book!

“Over the years, I was approached on many occasions to write a book, but I was always too busy and just didn’t make the time. In the end, my daughters insisted I get it all recorded or it would be lost,” she said. “I suppose there was a little bit of a lazy attitude if I’m honest, but I finally put pen to paper and I can tell you it has been a tremendous effort. It took about a year’s work, but I am so glad I did it.”

The book is a comprehensive collection capturing over 250 recipes of the food Maura has loved to cook throughout her life and successful career as cook and restaurateur. It features stand-out dishes from the first tea shop she and her mother Agnes opened in 1961 to the numerous renowned restaurants she was run since.

Key to the recipes, she explained, is her ethos of keeping food simple, cooking with care and using the best available local produce.

But Maura explained that as well as the array of recipes, she also enlisted the help and talents of some wonderful friends to create much more than your traditional ‘cook book’.

Working in close collaboration with Kenmare based graphic designer Éamonn O’Sullivan of Anchor Studio, the project was very much a labour of love, with Maura and her family undertaking the task of lovingly creating a beautiful book that would be a testament to her years of hard work and dedication to her craft.

Not only a cookbook, My Wild Atlantic Kitchen features Maura’s culinary recollections and stories woven throughout, accompanied by over 100 images of her recipes captured by Lynda Kenny and Maria Bell. In keeping with her love of art and the Irish landscape, the book includes photography by nationally renowned landscape photographer Norman McCloskey, illustrations by artist Christine Bowen and paintings from Maura’s good friend, internationally acclaimed Irish artist Pauline Bewick.

The foreword is written by Irish Michelin star chef Derry Clarke of L’Ecrivain Restaurant in Dublin, who describes the book as ‘a culmination of 60 years of passion, hard work and imagination.’ The book, he says, is a record of Maura’s legacy through the many years she has been at the forefront of Irish cooking.

“I was so blessed to have so many amazing people around me to work with, and we are thrilled with what we have come up with,” Maura told Connect.

Anyone who knows Maura knows her passion for food – something she says is vital if you want to succeed in the industry. This passion, she explained, came from her mother and grandmother, from whom she learned so much over the years.

“Mom was a marvellous cook and had a great palate and just loved food,” Maura recalled. “I remember some of the first things I made, she was quite critical, but over the years I learned so much from her. She took great joy in producing food on a budget and I always remember her saying ‘make food that is accessible.’ You don’t have to be a magician…you just need simple, good quality food, and passion. Passion is essential, because there is nothing worse than getting food from someone who doesn’t like cooking. You know there is no love there.”

Maura’s grandmother was a cook in Boston in the late 1800’s and returned to Kenmare in the 1930’s and built and owned her own grocery store.

Since the early 1960’s Maura has been a chef owner of several successful businesses in Kenmare. The Purple Heather (where Gráinne Maura’s sister still continues to run) The Lime Tree renovated and opened doors in 1985, sold when her uncle died, where she converted her grandmothers grocer and home, who was taken over by her uncle Packie, to Packies restaurant opening in 1992. Husband Tom and herself renovated and opened Shelburne in 1995.

Barry Geraghty – “I’ve achieved everything I’ve ever dreamt of”

Born in London during the war in 1942, she returned to Kenmare and opened a cake shop at the age of 19 with her mother, Agnes, who had worked as a professional baker in Fraser’s Tea Shop in Haverstock Hill, London.

In 1963 Maura and Agnes expanded the business and opened a restaurant, with Maura following her true passion of cooking in the kitchen mainly with fresh local fish including sole, cod, Atlantic prawns and lobster. She is largely self-taught, having completed a short course at Le Cordon Bleu in London in the 1960’s and undertaking stages with great chefs including Sonia Stevenson, the first woman to earn a Michelin star in the UK.

Asked if she feared producing a cook book in what is undoubtedly a hugely tough industry, with so many famous and not so famous chefs and food experts also vying for sales, Maura said it was never about competition.

“It was never my aim to compete, so that didn’t cross my mind at all,” Maura said. “This was an absolute work of joy and an experience that I loved,” she said.

All the recipes contained in the book are seasonal, classic and carefully organised into eight chapters: Breakfast, Starters, Fish, Meat, Vegetables, Desserts & Baking, Sauces, Stocks & Staples, as well as a dedicated section on Dinner Parties.

The book, Maura explained, is aimed at all levels and abilities, insisting that like many things in life, less is often more when it comes to cooking:

“It doesn’t matter how experienced you are, this book is for anyone with an interest in cooking,” she said. “Just like you can play most games at all levels, I believe you can also cook at all levels. Once you have good, fresh food you really have to do very little with it. In fact, sometimes the less you do with it, the better. I believe in the importance of the three Cs – cleanliness, consistency and care. It’s all about cooking simplicity.”

Turn to Nature for Healing