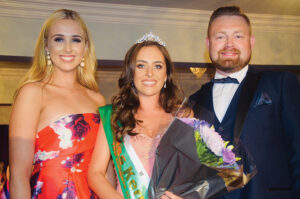 IF ever you needed proof of just how much positive mental health and a determination to succeed can help overcome the tough world of naysayers, then look no further than the newly-crowned Miss Kerry, Brógan O’Sullivan.

The stunning 20-year old Tralee woman encountered – and thankfully conquered – an onslaught of ‘mean girl’ mentality in her teens, but says that entering the Miss Kerry competition was not about getting revenge on those girls who made her life so tough, but to prove to herself that she was worth it.

Brógan doesn’t want to use the word ‘bullies’ as she feels it gives those girls power which they don’t deserve, but says there were certain people who made life very difficult for her in her late teens.

“Let’s just say I came across that mean girl mentality from a lot of people who humiliated me in public and on social media and who, even to this day, still try to put me down,” Brógan told Connect. “I left school early and my confidence was knocked quite badly over the past few years, so entering Miss Kerry was about doing it for my confidence.”

Brógan entered the Miss Kerry competition a few years ago but was unsuccessful, but says entering again was something she wanted to do for herself.

“I was still unsure even a few days before the competition and once I decided, I only told my mom and sister, no one else,” she said. “It was one of the best decisions I made because I just felt I was standing there with these other girls rather than against them, and no one was knocking each other.”

Hearing her named being called out as the 2018 Miss Kerry was an absolute dream come true for Brógan, who is still reeling from the shock.

“I was absolutely shocked and delighted when my name was called. I couldn’t believe it. I was always such a quite person who, even at sports days, didn’t want to get involved for fear of losing. So this was amazing,” she said. “It was such a fabulous feeling to get up there and smile, with all these other brilliant girls. I was told so many times by so many people that I’d never go anywhere without a Leaving Cert, so this was very special. ”

Despite finishing school early, a determined Brógan went on to do a PLC course in Applied Social Studies, graduating this summer with seven distinctions and two merits. She is now hoping to secure a place at IT Tralee this Autumn to study Social Studies.

She is adamant to use both her course – and her Miss Kerry title – to help promote positive mental health and is keen to visit schools and speak to younger children about the issue.

“I really want to raise awareness around mental health and it’s something I believe needs to start at a young age. We need to start talking to our children about it earlier than we are at the moment,” Brógan said. “Unfortunately we live in a non-realistic world and, for me, I really want to work with children and promote positive mental health.”

Killarney a special place with all that Space

Her desire to work with children undoubtedly comes from her inspirational mum, Edel Lawlor, who owns the award-winning child and adolescent play therapy service, Expressive Play in Kilflynn. Edel is also the founder of the renowned Kilflynn Fairy Festival, where Brógan proudly takes on the persona of the hugely popular and loveable character, Ruby the Rainbow Fairy.

“I’ve done fairy workshops with mum and I get to see firsthand the benefits and how it keeps children’s heads and hearts happy,” Brógan explained. “We speak to children about keeping themselves happy, how they should and shouldn’t act and get them to go around in a circle and say something nice about themselves and each other. It’s great to be part of.

“The fairy festival is something we are all so proud of too because it’s an amazing feeling to see these children really believe in magic and look so, so happy.”

Following on from her Miss Kerry win in June, Brógan will now go on to represent her county in the Miss Ireland competition in September – a role she says she will truly embrace.

“If this allows me to raise awareness of mental health then that is brilliant,” she said. “It’s not about a beauty pageant or a title for me, it’s about inner beauty and helping people find that.”