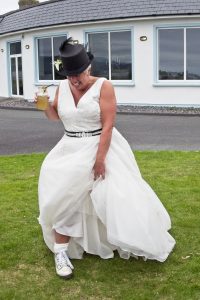 Our wedding day is one of the most important days in our lives but for this couple to renew that special day 20 years later was even more wonderful. From The Great British Sewing Bee to James Bond, and everything inbetween…

When Jo Arbon and her best friend Clair sat down to watch the UK Great British Sewing Bee, with a bottle or two of wine, I don’t think either of them anticipated it to end in a James Bond themed secret wedding vow renewals combined with 50th birthday celebration!

The event was held at Jack’s Coastguard restaurant in Cromane, and was blessed with beautiful weather. 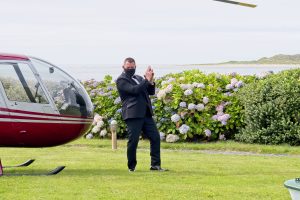 The Groom, thought he was simply having lunch at Jack’s with his wife on her birthday, and was completely stunned when he was asked to dress up in full tux and taken to Rossbeigh Beach, where the helicopter showed up in true James Bond style.

Sean couldn’t quite believe what he was seeing 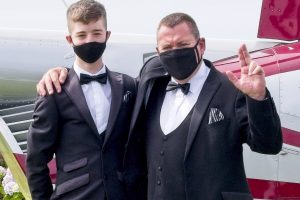 “I was so excited I tried to act cool and walk towards the chopper, but couldn’t keep it up and started to run towards it” said Sean

However, his first words on getting in the chopper were “Am I still getting lunch?”

In keeping with his James Bond style he was handed a cocktail on landing by Brian.

Nathan Kelly was the Best Man, 008! And both were dressed by Tuxedo in Tralee.

The ceremony was conducted by
our very own Mags Kissane, Married by Mags, in stunning outdoor setting. And guests were serenaded by Ciaran Wynne, local singer/songwriter. 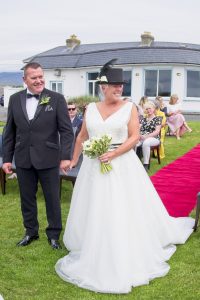 A Secret Facebook Group was used to invite the 50 guests, with a live video stream with over 150 people watching on the day from all over the world. 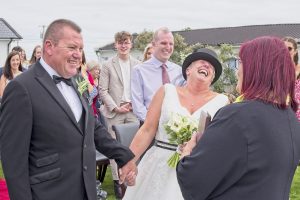 The Bride’s brother, Simon, came over from the UK to give her away, and was fully PCR tested so he could attend. It had been over 2 years since she had seen him last.

The Bride was dressed from Cinderella’s Closet in Cork, after doing a whole Say Yes to the Dress day, in secret of course!

The cake was made by Orla’s Country Kitchen in Listowel, a beautiful chunky chocolate biscuit cake. The flowers came from Shades of Bloom in Killorglin. And all signs and decorations made by Nina Finn-Kelcy of Izzy & Jules. 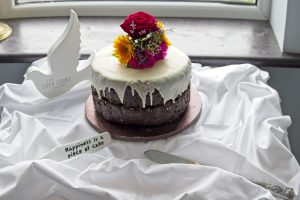 Local photographer David Rolt kindly offered his services to take these wonderful photos of the day.